I enjoyed a very inspiring afternoon at the Design Change Makers event on 01.03.19. And got to see some fantastic projects from industry professionals, graduates and students who have already used their talents to create positive change.

The event kicked off with Chrissy Levett introducing Creative Conscience and its purpose and going on to share case studies on how different creative disciplines were tackling Mental health. 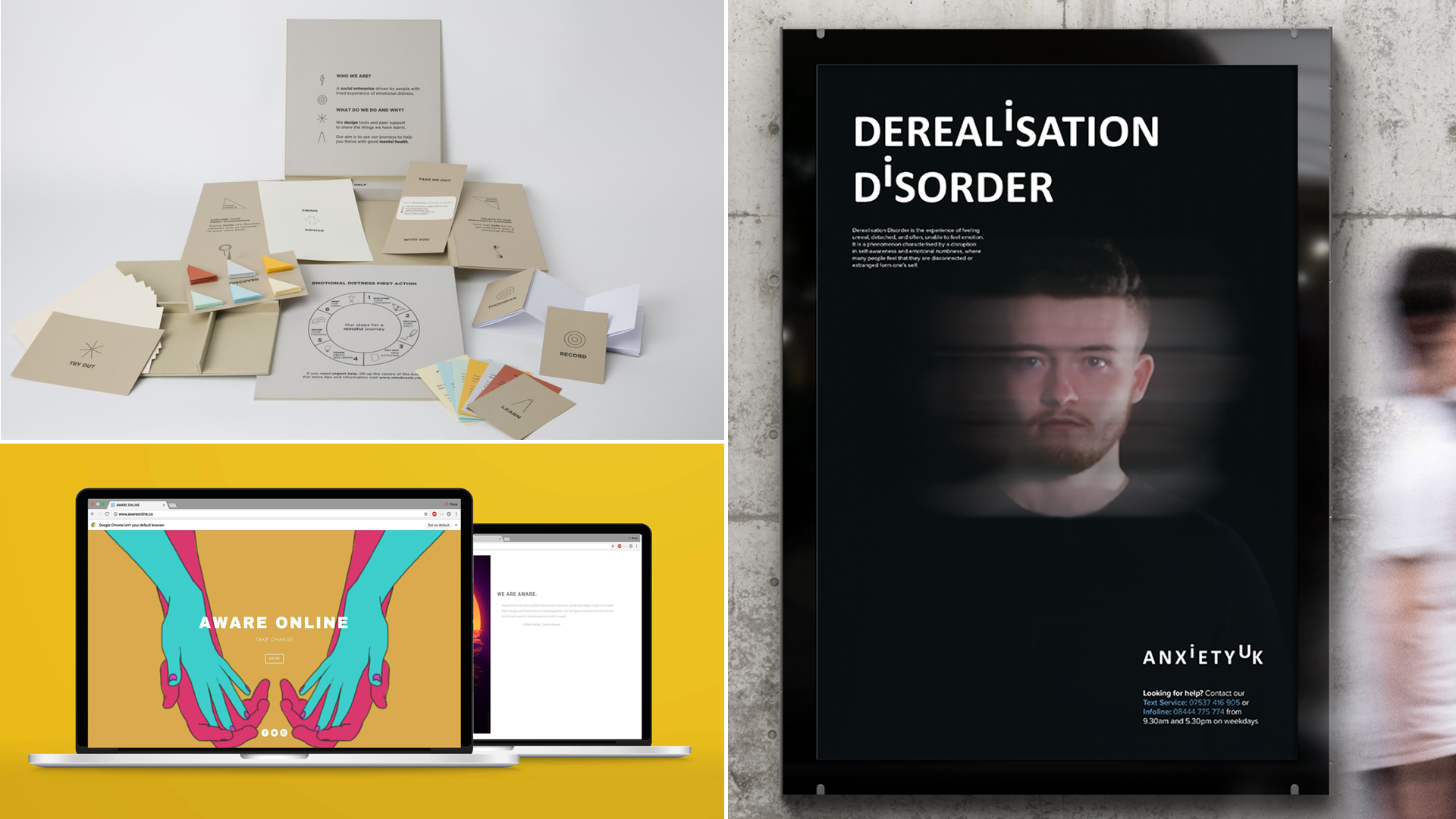 There followed a panel discussion with Rosa Kim, Sara Lopez and Jacob Ham. Rosa independently set up a mental health platform, Aware Online. Which encourages discussion on mental illnesses and provides practical coping mechanisms for those dealing with mental health issues. And Sara’s project ‘Mindnosis’ is a self-assessment system that helps navigate mental and emotional distress when experienced for the first time. Jacob Ham discussed his rebrand and awareness campaign for Anxiety UK. All of the panelists projects came from a place where mental health issues had played a part in their lives so they decided to do something about it. They talked about the very personal inspiration and driving forces behind their work and it was great to hear from such proactive and productive people. 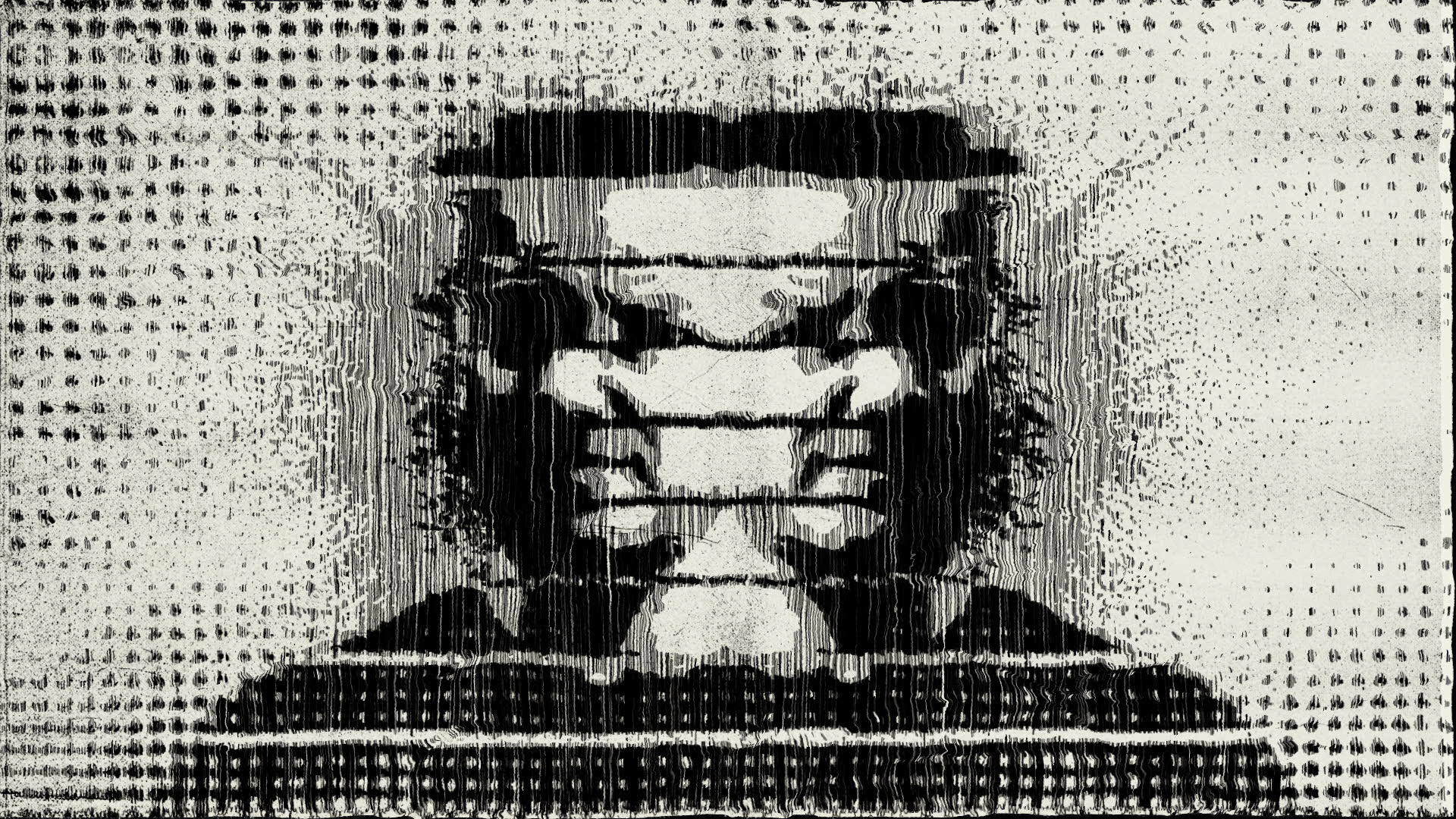 Then it was my turn! I was talking about our project ‘Paul’ Poem ’which features in the Steve documentary by Ben Akers, and you can see in full here.

I went into quite a lot of detail about the production process from the beginnings of the project and my need to get to know Paul who’s words we were illustrating in the film. Through some of the aesthetic ideas behind the project and how practical considerations around the time it took to make influenced production decisions. I finished by talking about the idea that good things happen when you’re doing good things: about how, by creating the animation it started to achieve some of the things that the documentary was setting out to do. It led to many situations where men were openly sharing their experiences with mental health - and reducing the stigma of men sharing their experiences with mental health to try to prevent them taking their own lives was the driving force behind the project in the first place.

These images show how I drew out my talk to practice it as our visual memory is much more effective than remembering text alone. because Scientists believe that the brain is able to process images approximately 60,000 times more quickly than it processes a similar amount of written information!) ... It means that when you see an image it is stored in your memory “in the form of a picture”, but also “in the form of a word”. Which is also a big reason why animation and video are such powerful mediums to communicate important messages.

My talk notes in visual form

Then Irene Palacio and Tessa Blencowe talked very engagingly about their London Is Lonely project. And How might we use art in public spaces to reduce the stigma of loneliness and get London talking. Again the work was driven from personal experience, and you could really feel that in the delivery of the talk. 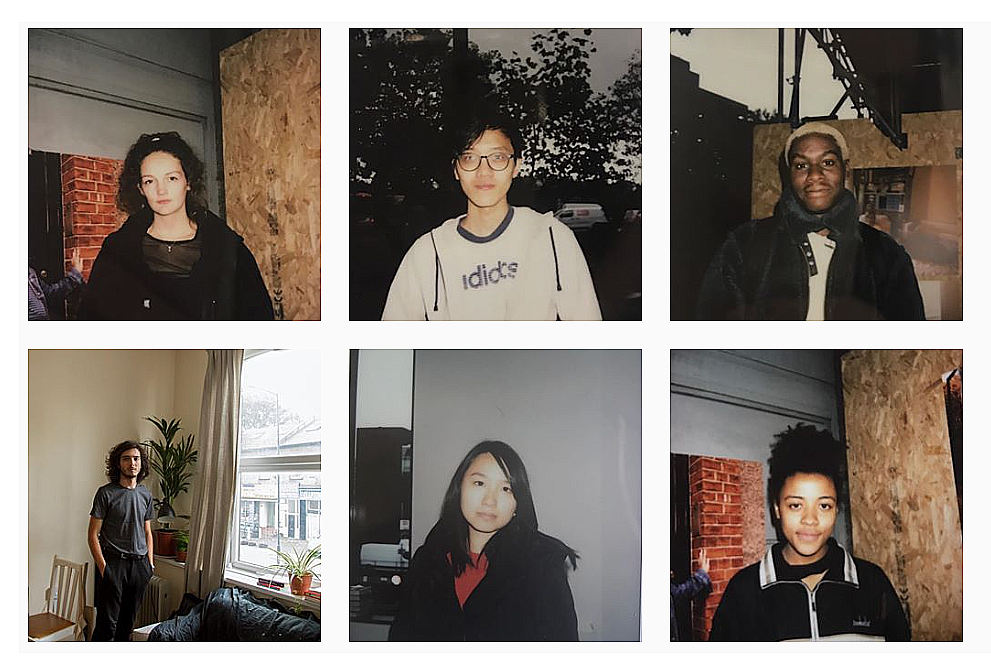 Next up was Bernard Hay, Senior Learning Producer at The Design Museum and London Area Representative for Engage, the National Association of Gallery Education. He spoke about some Design Museum community outreach projects and how engaging with nature in the city can help our mental well being. It was good to hear how the organisations work extends beyond the obvious activity of the museum and into the local community.

After a little leg stretch break it was time for the second panel discussion of the afternoon with Abbi Fletcher, Shannon Bono & Sabrina Hasan and Gabriela Matouskova hosted by Paul Barlow from L&Co Design. Again some really engaging projects were discussed.

Abbi Fletcher shared background on her Senscapes project looking into the positive effect that Psilocybin (the naturally occurring psychedelic found in magic mushrooms) can have on mental health and depression. It was fascinating hearing the crossover between neuroscience and psychedelics!

Shannon Bono & Sabrina Hasan discussed their Black Bodies - Brown Parasites project; an ‘exhibition of new works that explore an activist dialogue in connection to the body, from both Black and Brown perspectives.’ Which was more inspiring student work driven by personal experience.

Gabriela Matouskova talked about a community art project called The Gratitude Wall. Where a large chalkboard is placed in public spaces for communities to share what they are thankful for and to learn about benefits of practicing gratitude. I liked hearing about the scale of the project as a gratitude journal is something I’ve been keeping daily for a while now and on a personal level I find it very beneficial. Just keep a notebook by your bed and every night record the things you feel grateful for and that have made you smile, no matter how small or inconsequential they seem to be. Over time it becomes a great record of the good things going on in your life too. 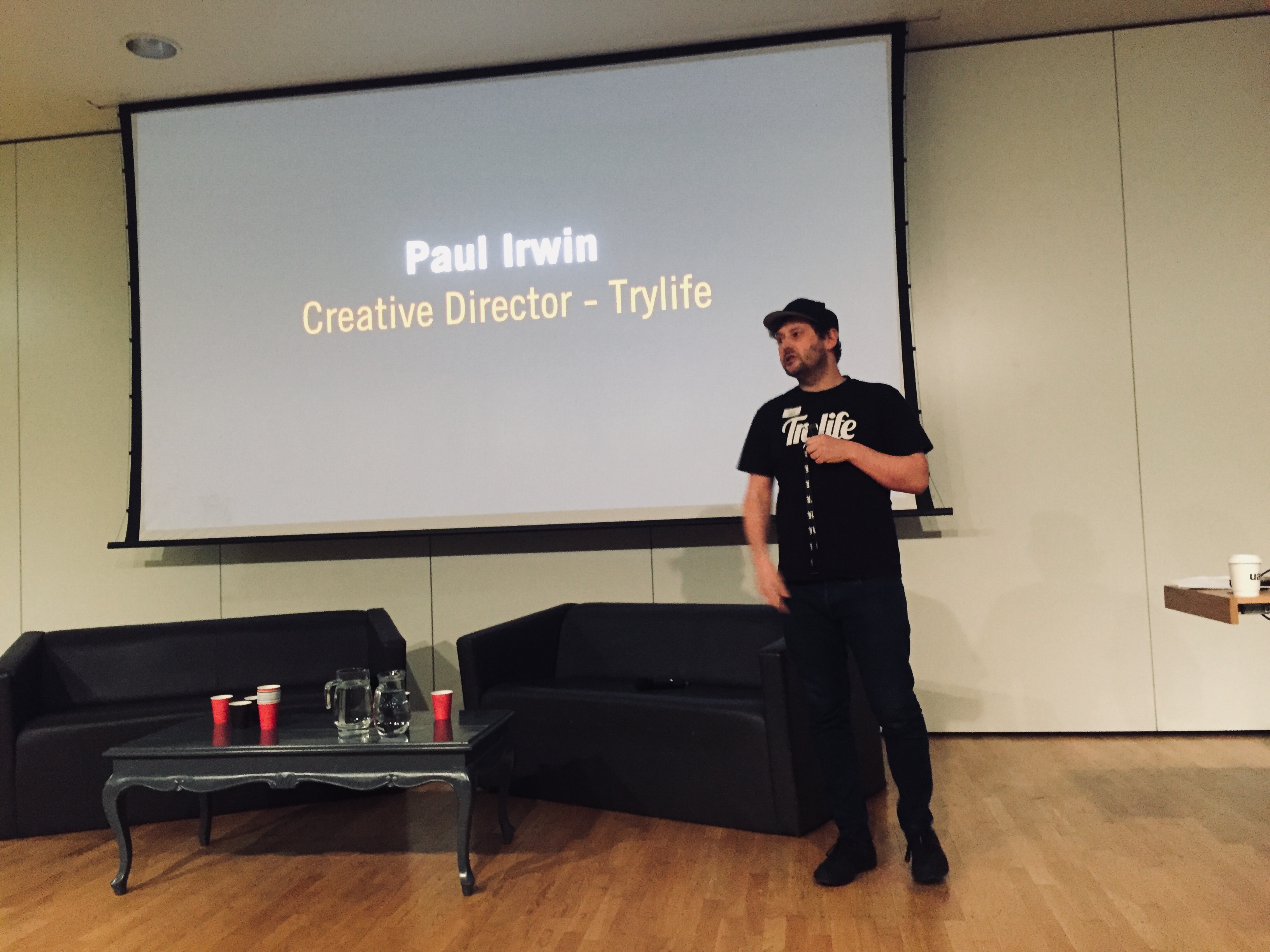 After that was the final talk of the day from Paul Irwin - Co Founder of Trylife TV - Paul’s story is truly inspirational - he created TryLife films after years of international youth work. And has since made interactive films to educate young people about issues of mental health and well being. The idea is based on choice-based adventure books where you reach a point in a story and get to choose between different outcomes means the viewer becomes the director and allows teenagers to learn by making choices in a safe environment. And it’s watched by over 100 million people worldwide. And if that isn’t enough he’s also brokered a peace treaty between The Bloods, The Crips and the Mexican Mafia in Compton, Los Angeles! Hearing Paul tell his story totally blew my mind and I’m really glad I wasn’t talking after him! 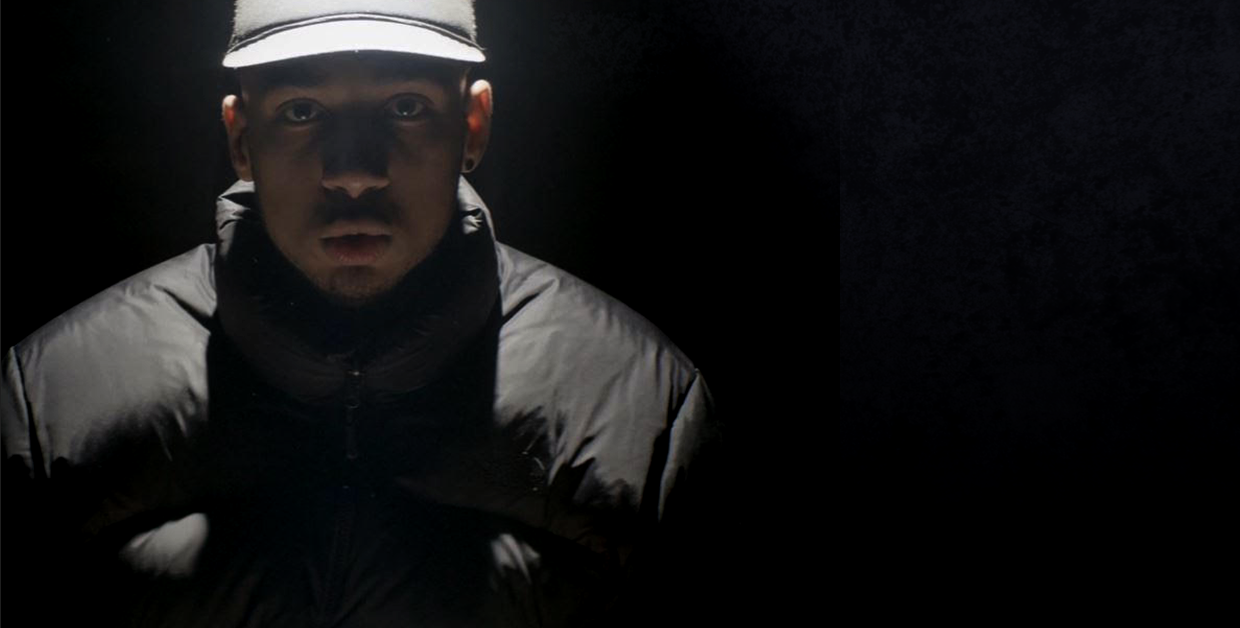 There followed a discussion between Amberlee Green - Student Mental Health advisor at UAL And Kat Outten – a post-grad student who leads the ‘Mentally Chilled’ society for students at UAL. The society offers support and connection between students dealing with mental illness through all sorts of activities including Pets 'N' Pizza! Again another great idea from someone taking the initiative in order to help themselves and others. 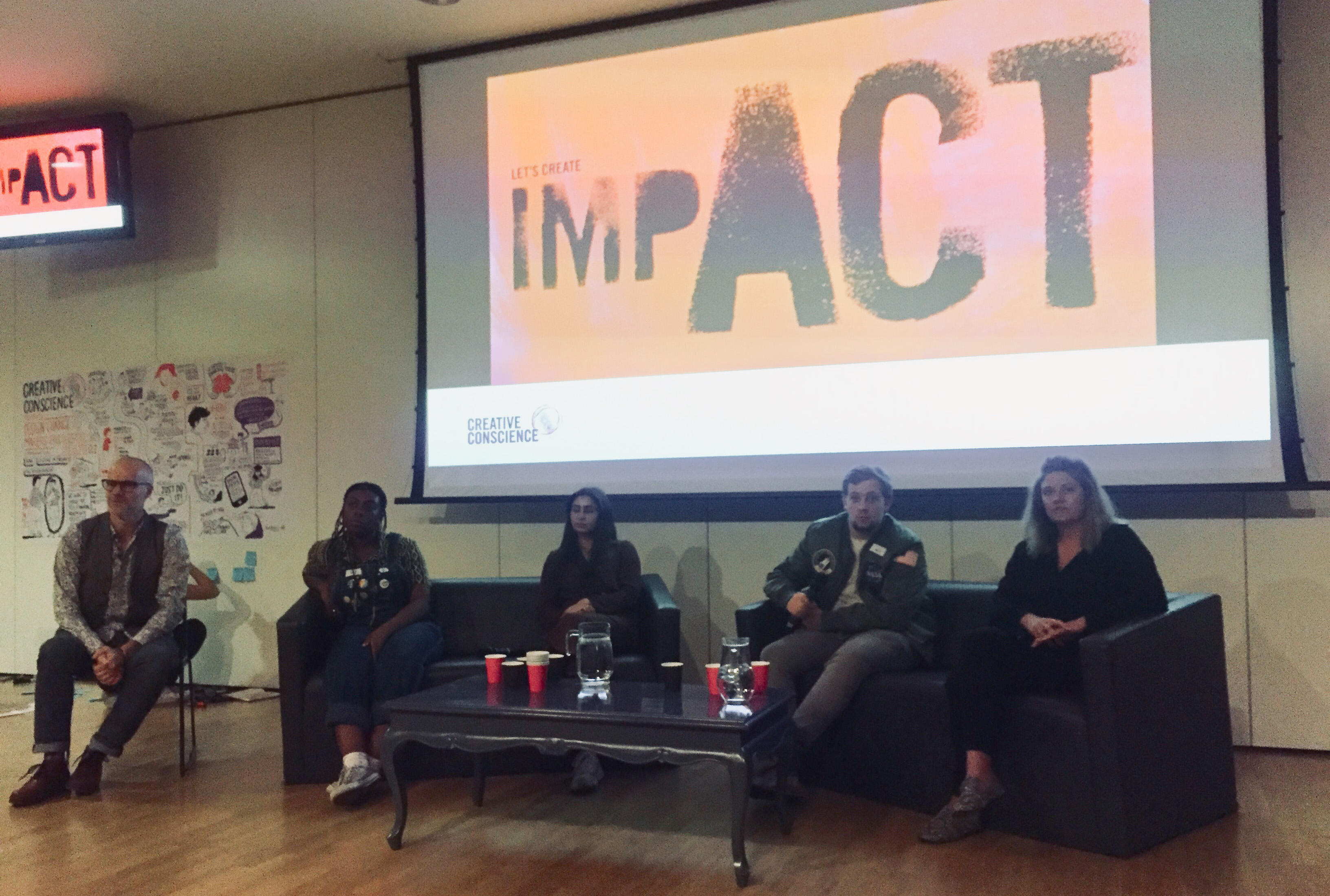 That left time for a Q&A session from the audience with the panelists and speakers where subjects ranged from the need for systemic change in mental health provision to how to budget your own self initiated purpose driven projects.

Overall Themes In the vast majority of the work shown and talked about there was a very personal driving force behind the projects and the event was a refreshingly open conversation about how mental health issues affect all of us. And how creative responses to this can really help create positive change. I was humbled at times by how honest people were and inspired too. Paul Irwin’s Trylife project blew me away and as I’m sure it did most of the people there too. If you haven’t seen it check it out, it’s incredible. But all of the projects are strong in their own right. Massive thanks to Chrissy at Creative conscience for inviting me to talk and for putting on such a brilliant event. I learnt a lot, I found it very emotional at times and I hope it encourages more creatives to involve mental health themes in their work.

Hope you enjoyed reading and all the best,
Merlin 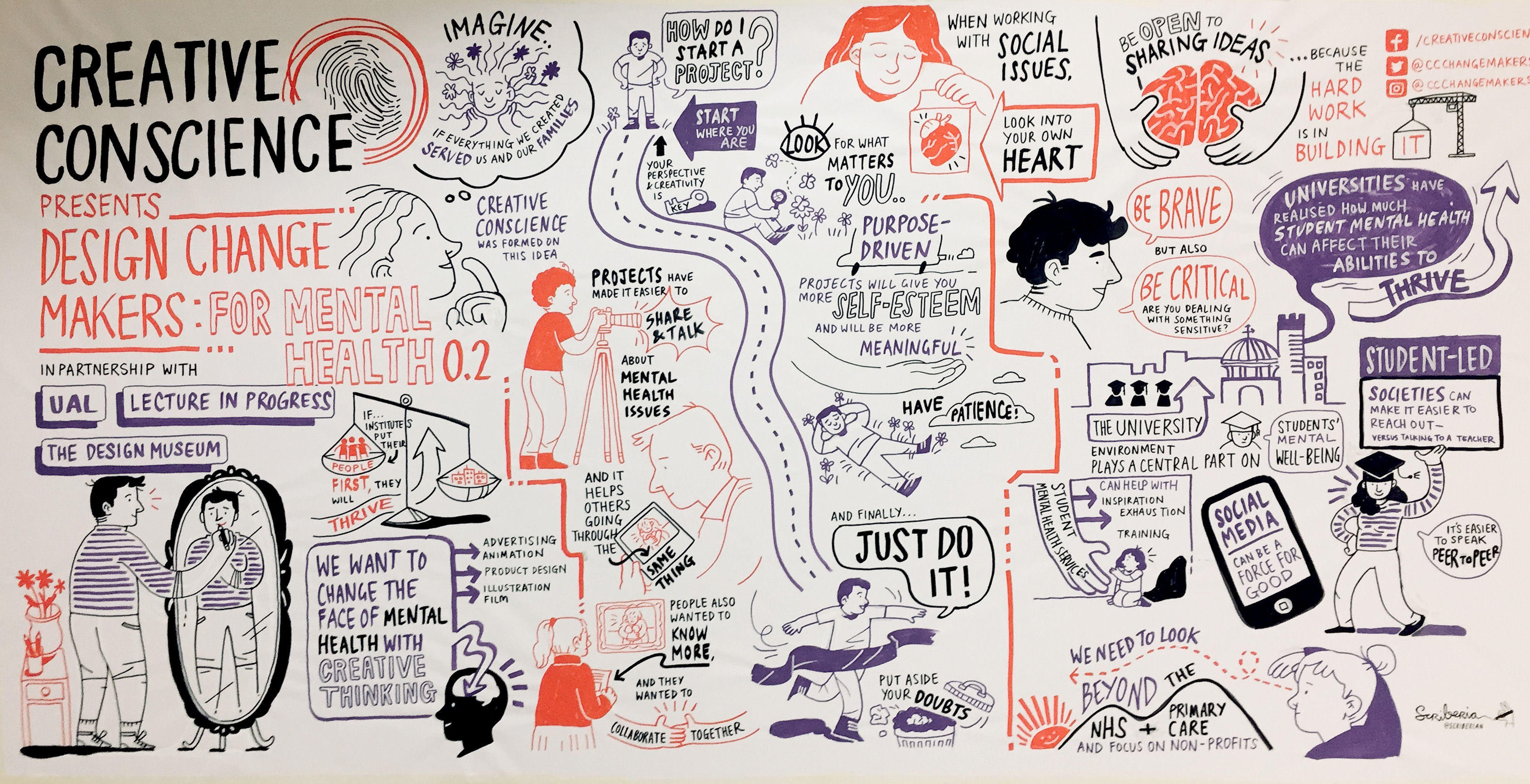